Vienna, the charme of the Austrian capital

Book now your car rental at the airport of Vienna and take advantage of the low cost rates of Rent.it. 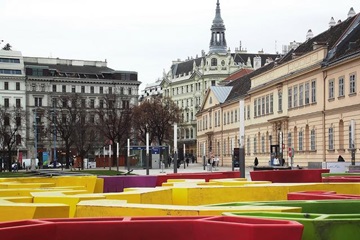 Vienna, the capital of Austria, was the cradle of the Austro Hungarian Empire and known worldwide for hosting some of the greatest composers of the eighteenth and nineteenth centuries. Among the most beautiful places to visit there are the gothic church of St. Stephen, the Town Hall (rhathaus) and Parliament, but also the royal palaces of Schonbrunn (the summer residence of the Habsburgs, with a park which is also the city zoo) and the Hofburg .

In addition to that of St. Stephen in Vienna there are many other churches such as St. Bartholomew and the cathedral Maria Treu. The city is also famous for its Christmas markets, made even more magical by the lights and decorations adorning the streets of downtown during the holiday season.

Among the gastronomic specialties to taste, absolutely worth a try are the Tafelspitz (boiled beef with chives and roasted potatoes) and Sachertorte.