Some itineraries for discovering this beautiful European country. 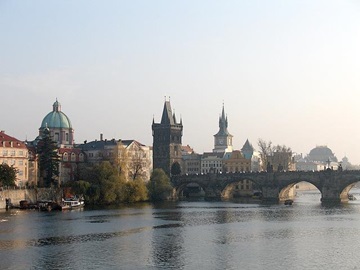 The Czech Republic is a country member of the European Union. It is located in central Europe and it doesn’t have access to the sea. It is constituted of three regions: Bohemia in the west, Moravia in the east and Silesia, which is shared with Poland. The state was born after the pacific division of Czechoslovakia into two countries, the other being Slovakia. The main cities are: Prague, the capital and largest city; the industrial city of Brno; Cesky Krumlov, Kutnà, Hora and Olomouc.

In one day: Prague

The capital city is rich in architectures, for example the Castle, at whose feet lies the district of Malà Strana (or Little City). The historical center is crossed by the Vltava river with its numerous bridges. Worth of note is the Charles Bridge:it can be crossed only by foot and from it it is possible to enjoy a wonderful panoramic view of the city. On both sides of the bridge there are 30 statues depicting various saints. Worth a visit are the New City and the Astronomical Clock located in the Old Town Square. Particularly interesting is the Jewish Quarter of Josefov, with its cemetery where the tombs were stacked on top of each other for reasons of space. Starting from the Castle and along the old Royal Street it can be found the Powder Tower, the simbolic entrance to the city, and the City Hall. Then there are the House of the Black Mother of God, with the Museum of Cubism; the Temple of Tyn, the Old City Hall woth the Astronomical Clock, the gothic Gate Bridge, the baroque Church of St. Nicholas. Finally the gothic cathedral of St. Vitus, with its golden door and the stained-glass windows, in whose basement there are the tombs of the Bohemian kings, famous for the changing of the guard.

Brno is famous for the car Grand Prix, but there is more. The historical center lies around Freedom Square where there are Schwarz Building and the House of the Four Mamlas, a colorful building whose façade is decorated with some figures with the faces contorted in the effort of supporting the house and holding up the pants. In the square called “Cabbage Market” there are the Parnas fountain, where carps lived ready to be fished and sold; the Reduta theater and the Dietrchstein Building. On the Petrov hill lies the Cathedral of the Saints Peter and Paul, neo-gothic in style but with baroque furniture and several statues of saints. Worth seeing is the Spilberk Castle, with its gothic hall, the chapels, the prisons, the dungeons with the casemates; the church of the Assumption of the Virgin, which houses a painting on wood of a black Madonna. Among the most important monuments of Olomouc there are: the Column of the Holy Trinity, in baroque style, with a small chapel with several statues including the Trinity in gold leaf and 18 saints; the cathedral of St. Wenceslas, with its spiral bell tower and the remains of St. John Sarkander; the sanctuary of Svaty Kopecek, with the cathedral and the sanctuary of St. John of nepomuk; the astronomical observatory. Finally, it is worth visiting Cesky Krumlov, with the Zamek Castle and the church of St. Vitus, and the thermal springs of Kutna Hora.