Travelling to Milan: A small guide of things to see

Tips and tricks for your next visit of Milan with a car rental booked on Rent.it 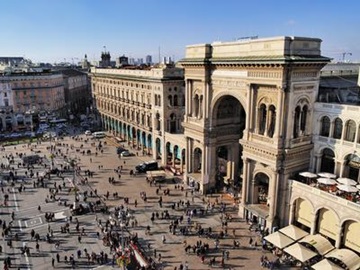 Smart, bustling Milan - heartland of business and the Italian economy, fashion and style capital of Italy - has plenty to see. Milan cathedral, il Duomo, is one of the largest in the world. Taking over 500 years to complete, styles range from Gothic to Renaissance and Neo-Classical. Its roof boasts 135 spires, countless statues and gargoyles, and on a clear day, far-reaching views to the Alps. The glittering nineteenth century Galleria Vittorio Emanuele II, known as Il Salotto di Milano (Milan's drawing-room), has mosaic floors, with a metal and glass roof crowned by a central dome. You don't have to be rich to enjoy a stroll past its shop windows. The Teatro alla Scala, opened in 1778, mounts top opera productions, with The Museo Teatrale next door providing good views of the empty auditorium. The museum contains sets and costumes, and also theatrical items dating back to Roman times. Some of Milan's finest churches and monasteries are outside the centre. A must-see is Santa Maria delle Grazie, where Leonardo da Vinci's masterpiece, The Last Supper, adorns the refectory wall.

You may prefer car-hire if you are moving around - you'll be able find cheaper accommodation on the outskirts, too. An online broker such as Rent.it can book your vehicle for collection at one of the city's airports (Linate and Malpensa) or its central train station, or at Bergamo airport. Motorways link Milan with the rest of Italy, but there are many places worth visiting in Lombardy first. Try to avoid rush hour, or park in one of the commuter car parks near the exits of Milan's motorway ringroad, with Metro connections. If you do drive in, check the one-way system, but be aware that there is a weekday 07:30-19:30 central congestion fee (exempting electric/hybrid models). Your hotel may provide parking, of course, or you can use kerbside Pay-and-Display. Buon viaggio!